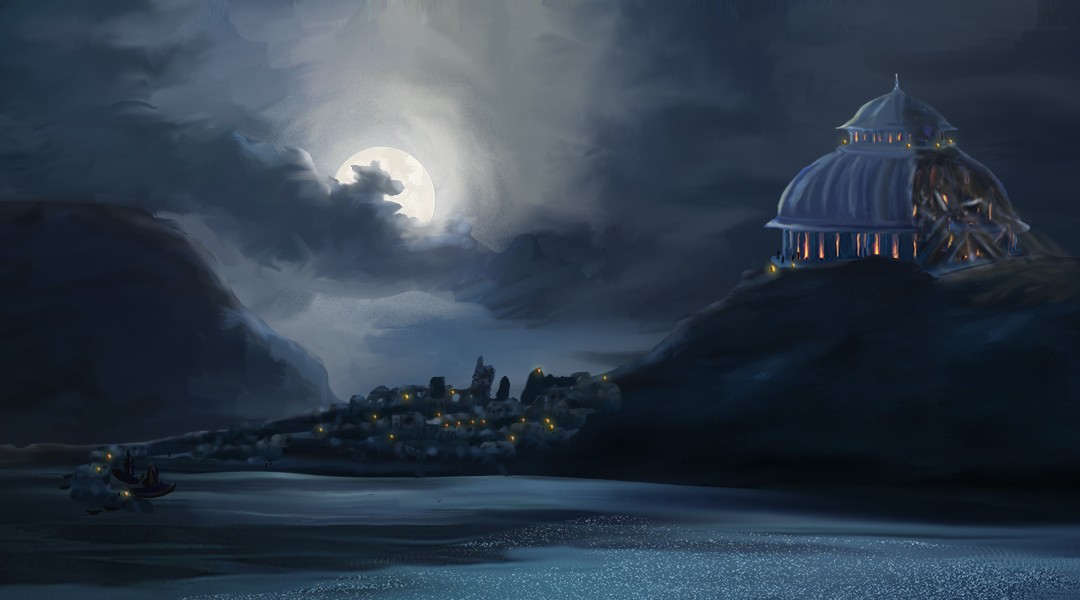 By Amirantella Silberberg, our correspondent in the Western Empire

When you are on the ship Lunata approaching the Great Temple of Crossos in the huge Moon Lake, you may find yourself sighing in awed wonder. A huge black mountain appears to swallow all the light in the area of the port. An onion-shaped dome 800 feet high dominates the sky and you can just make out the semi-collapsed north side of the dome from afar.

The fact that the dome still stands is thanks to the ingenious magic of the dwarf builder Hugli and the elf architect Seraphiona. The floor plan measures 1300 feet square and originally had 120 weight-carrying and 240 decorative pillars.

Everything is built of volcanic black basalt from the Giant Mountains. On the high feast day of Crossos, 50,000 believers gather to celebrate ‘Victory over the Old Gods’ and the ‘Day of Destruction’ in the temple’s sprawling interior.

Why mention the 120 carrying and 240 ornamental pillars?

Because if you enter the inner temple, on the north side many columns are overturned and walls are torn apart.

Has a major earthquake occurred here?

My temple guide, the Crossos priest Elchisedes, breaks into a grin. Then he tells me, while we are heading toward a fountain at the top of the destroyed section, the mystery of its current state.

More than 600 years ago, Hugli and Seraphiona had completed the temple using 3,000 slaves, 350 masons and 200 other craftsmen. Crossos then sent his High Priest a vision. He should go alone into the newly completed outer temple and sacrifice an ox to Crossos .

The High Priest Alchorios did as he was told and as he was deeply engrossed in prayer, Crossos entered the body of the high priest and caused him to grow and grow until he was a giant 60 feet tall.

Then he grabbed a decorative column and raged for three hours in the north wing of the temple. He destroyed pillars, altars, alcoves, benches and statues. As a final act, he grabbed a pillar and hurled it like a spear from the roof out into the Moon Lake (today that area in the lake is a place of pilgrimage, especially for fishermen and sailors).

After that, Crossos let the high priest shrink back to his normal size and left his body. Not, however, without leaving him a vision of how seats should be carved into the fallen columns and remains of the walls, and instructing him that the whole place was to be enshrined as a memorial to the holy destruction.

When Hugli later saw the extent of the damage, he sat down at the edge of the debris and wept for seven days and nights. On the seventh night Crossos appeared to the grieving dwarf.

“Do not cry any more, Hugli. All is good just as it is. I thank you for this masterpiece,” he reportedly said.

Then Crossos created a salt water well at the site where Hugli had wept so long.

Seraphiona had a beautiful fountain built around the spring and with a clever design created areas where the salt was deposited and became crystallized.

It is now sold as the ‘Temple Salt of Crossos’ or as the ‘Stone Tears of Hugli.’

And that is the legend of the Great Temple as told by my guide, Elchisedes.

When I stand in the north area in front of the podium, benches and tables that are cleverly hewn into the fallen columns and walls, I too can see the beauty that has emerged from the destruction. Wonderful ornamentation adds to the original layout of the decorative columns.

It goes without saying that only the nobility and the priests are allowed to sit in the devastated area. And miraculously, from these places that have arisen in such a chaotic, brutal manner, one has the best view of the main altar and the giant statue of Crossos rising behind the altar.